Gia Cecchele, pharmacist/proprietor at Inglewood Amcal+ Pharmacy and Innaloo Discount Drug Store, Perth. I oversaw a major refit for my pharmacy and was offered a very good deal to also install an Alpaca robot shortly afterwards. Not wanting to pass up this opportunity, I bought it, unsure how and where I would now be able to fit it in, given that my pharmacy had just had a major renovation. I found that the big thing with the Alpaca was that it was on wheels and was tiny and just fitted into half of my Webster packing area in its entirety, and fitted in nicely. All I had to do was modify a shelf and slide this thing into place. One thing I did learn was that there is no real need to renovate your pharmacy to specifically fit this robot in. It took two days to get the pharmacy staff accustomed to it. The bigger part was the software coordination, which took longer. The big trick was actually putting the correct code on every single one of the drugs that was in each person’s profile. So my Webstercare could talk to my Fred dispense system and that in turn could talk to the Alpaca. As we were new to this machine, it took a bit longer to understand. But saying that, this machine is like a Subaru: all you have to do is turn it on. We did have the installer come in and show us how to clean and reinstall the canisters as well as setting aside some time for staff learning. We re-rostered our timetable so each staff member got some time with using the machine. You do need to spend time and do it properly. You can’t just be sitting there dispensing and listening to a customer, it just won’t work. We got training over the phone. You’ve to remember this is WA, and no one comes down here unless they have to. Saying that, we were one of the first sites in Australia to get the first Alpaca robot in 2015, so they have learnt a lot since then, as have we. I’m extremely happy with it, as are my pharmacists. They love working with the Alpaca robot. It’s a bit of a status symbol for them. It’s efficient, because we really tested it. Our Webster packing used to take us 15 hours a week for about 100 packs plus dispensing scripts, which you have to do anyway. We’ve now dropped to doing the same amount of packs in six and a half hours plus an hour for de-blistering and putting into the canisters. The big part was the accuracy. It was 100 per cent right. 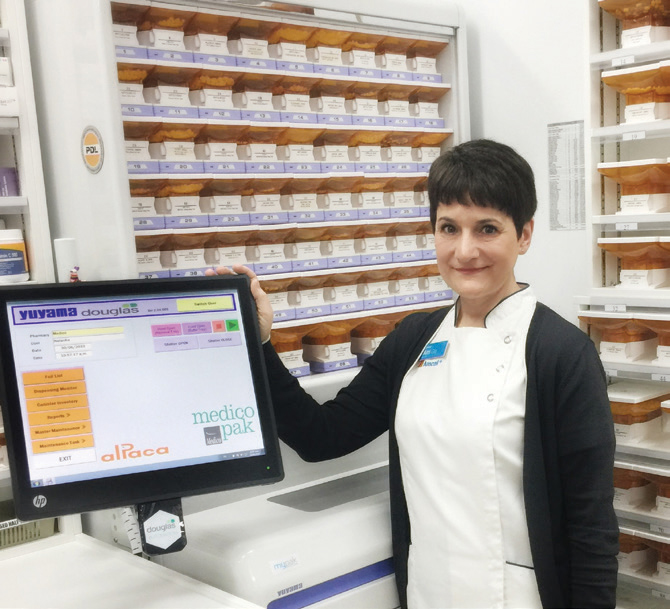 I was checking all the packs (as you still need to do that) with my manager, and this is critical: this is the first time it was totally  accurate, and that to me is the most important thing. I also found that with leasing one and taking into account the efficiency, the depreciation, and the fact that you don’t need to do a big refit, honestly it’s worth it.